So, Barak Lurie had started the arbitration in front of the Beverly Hills Bar Association. Now some thoughts that went through my head: When I had demanded my money back he had played real hard-ball – calling it extortion and me a criminal, and that he would never give in to such a ‘vinegar’ approach.

I had long worked with Japanese and I thought maybe there is something going on that can be handled with the Japanese metaphor “losing face.” Mr. Lurie could not just give in now and write a check, but if there was something external that says he should give the money back, that would be a good way out without losing face. As my intention still was just to get my money back, without any vendetta, I decided to play along. I invested the time to write my answer to his claim and mailed it into the Beverly Hills Bar Association. Wheels apparently turn slowly over there as it took weeks to get a meeting scheduled but it was finally set for February 8, 2011.

I had no illusions of any unbiased arbitration in front of one or more lawyers when going against one of their peers – I played along to allow Lurie to save face and make my chances of getting my money back maybe a little bit bigger.

February 8 came and I battled morning traffic into Beverly Hills, was there in time with even 10 minutes to spare. I announced myself and learned that there is no arbitration scheduled for today. Hmm – did I make a mistake? Fortunately I had the document with me and we verified that it should be today. A phone call later and Elaine came in who is apparently in charge of scheduling arbitrations and showed me the following printout of an email… 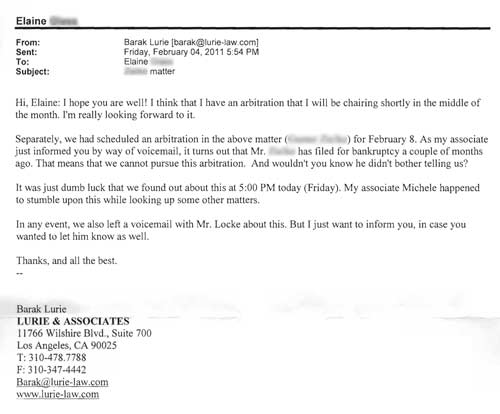 In order to make this easier to read and for Google to index it, here the text of the email:

Hi, Elaine: I hope you are well! I think that I have an arbitration that I will be chairing shortly in the middle of the month. I’m really looking forward to it.

Separately, we had scheduled an arbitration in the above matter ([name withheld]) for February 8. As my associate just informed you by way of voicemail, it turns out that Mr. [name withheld] has filed for bankruptcy a couple of months ago. That means that we cannot pursue this arbitration. And wouldn’t you know he didn’t bother telling us? It was just dumb luck that we found out about this at 5:00 PM today (Friday). My associate Michele happened to stumble upon this while looking up some other matters.

In any event, we also left a voicemail with Mr. Locke about this. But I just want to inform you, in case you wanted to let him know as well.

Thanks, and all the best.

Speaking of dumb – does Mr. Lurie really think that Elaine is so dumb to believe that he runs into that information the last possible Minute to cancel that meeting without the Bar Association unable to contact me to tell me about it? He sent that email the last Minute before the weekend and is (most likely) well aware that Elaine is not in the office on Mondays and will receive that email when I am already at the office for my appointment.

And what about the facts? Hey, I have filed for bankruptcy protection, but Mr. Lurie was not named as a creditor, in other words his claim was not part of the bankruptcy so his argument for canceling has no merit.

Nevertheless, I now have to assume that my assessment of his motivation for starting  the arbitration was wrong. Or was it just cheap revenge for me publishing these web pages?

Going down to Beverly Hills today all in vain might have set me back time-wise a little bit but I learned something valuable, very well worth the time invested: this email to Elaine that I can not image Mr. Lurie would have wanted me to see. So, he is one of the arbitrators himself, so I am even more sure now that a non-lawyer would have no chances of getting a fair treatment in front of that body.

That might be true also for the California Bar Association, but after being stood up intentionally I really think that I will have to file my official complaint with the Bar, something I held off for so long to allow Barak Lurie to come to his senses and just give me my money back. I guess he must be really strapped for money to take that risk.

My money back is indeed all I want – no damages, no penalty, just the money I have him for something he did not do.

This entry was posted in Barak Lurie. Bookmark the permalink.